• Cohiba Behike, the most exclusive línea of the most prestigious Habanos brand, arrives in April to the markets with three new formats: BHK 52, BHK 54 y BHK 56.

• Its extremely limited production incorporates for the first time in the blend of its three vitolas the tobacco leaf called â€œmedio tiempoâ€ that grants it exceptional character and flavor. 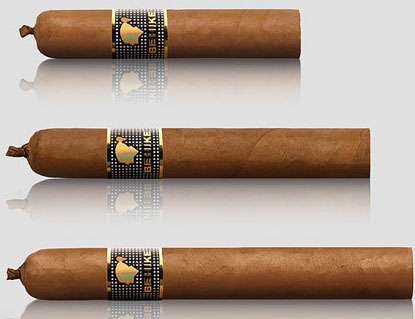 Created in 1966, in its early years Cohiba was only a Cuban state gift for Heads of state and diplomatic delegations. Cohiba is the most prestigious Habanos brand, and is as well the first name given to tobacco. When Christopher Columbus arrived in Cuba in 1492 he saw that the Taino Indians, inhabitants of these lands, used to light some rolled leaves which they called â€œCohibaâ€ and which they later smoked following a ritual. As registered in the chronicles and travel diaries, that ceremony was conducted by a highly respected person called â€œBehikeâ€.

After many years of work Cohiba Behike is finally in the markets starting April 2010. Considered â€œCohibaâ€™s best kept secretâ€ , Cohiba Behike will be produced each year with the best Cuban tobacco coming from San Juan y Martínez (D.O. P, Protected Denomination of Origin) and San Luis (D.O.P) inside the Vuelta Abajo Region (D.O.P) in extremely limited quantities in the prestigious â€œEl Laguitoâ€ factory. Its blend incorporates for the first time the â€œMedio Tiempoâ€, a leaf that attributes to the cigar exceptional character and flavor.

Also denominated Fortaleza 4, the Medio Tiempo is a very scarce leaf coming from the two upper leaves of the sun-grown tobacco plant. However, not all these plants produce both. The sufficient availability of Medio Tiempo to be used in regular productions depends of the dedication, care and attention paid to each tobacco plantation and growing of each plant, considering the changing climatic conditions as well.

Due to the foliar position in the plant, the flavor and fortaleza of the Habano concentrate with greater intensity in the leaves of â€œMedio Tiempoâ€.

The new vitolas will be produced each year in extremely limited quantities due to the natural scarcity of the Medio Tiempo tobacco leaf.

The three vitolas of the new Línea Cohiba Behike are:

PRESENTATION: .Each one of the vitolas is presented in an exclusive 10-cigar lacquered box.

.The Behike bands bear two holograms for security identification for the first time.

Not only its blend and the boxes are exclusive, the three new formats of Cohiba Behike have not existed in Cohiba or in Habanos before. Their heavy ring gauge, in addition to provide excellent burn, will allow the smoker to appreciate and enjoy all the intensity and flavors offered by this exquisite and unique blend.

Cohiba Behike is the brandâ€™s most exclusive Línea, whose price is the highest of all Líneas Cohiba launched up to the present.

Cohiba Behike is the ultimate expression of the taste and aroma of the Habano.